“We leave something of ourselves behind when we leave a place, we stay there, even though we go away. And there are things in us that we can find again only by going back there.” ~ Pascal Mercier, Night Train to Lisbon

51 Elm Street is the symbol of our sorority and she needs our help!

The Heaven & Earth Proposal’s primary aim is to raise funds to repair the roof of our beloved mansion. The roof is the most critical repair needed to slow or stop additional damage which will result due to leakage. It couples the roof project (“Heaven”) with the brick walkway project (“Earth”).

It is our aim to complete both Heaven and Earth and therefore we have set the goal to raise $48,000 in two years with the brick project being the reward for the whole OAA for meeting the goal and individual memorialized bricks the reward for meeting individual goals. Updated October 4, 2018!  Click here for the H&E progress update.

Please click on the tabs for the details on the many ways offered to earn memorial bricks.

Let’s show our Omega hearts and move Heaven & Earth to help save our Lady who always welcomes us home!

Objective
The Omega Alumni Association Fundraising Team in coordination with Omega alumni and Active Omega Delta Phi membership will raise $48,000 by Q4 2019 for the purposes of financing a new roof and associated structural repairs and a brick walkway at 51 Elm Street in 2020.

Background: Carole Raymonda, the former Alumni House Advisor (thank you for years of service), indicated that a new roof and structural repairs were the highest prioritized need for the house at 51 Elm Street. Estimated cost – $40,000

A proposal for a brick fundraiser was made by Peggy Blumenthal Jerchower. Estimated revenues for a project are $6,000 to $8,000 based on participation rates, cost of bricks, landscape design, and installation. The estimated revenues fall significantly short of the need, but the Memoriam brick concept holds considerable appeal for a number of alumni. The estimated cost for a brick walkway – $5,000 (This is a place holder as the final cost will be dependent upon the design of the walkway. It is important to note that the Active Membership owns 51 Elm Street, and therefore the decision on the final design will belong to the Actives.)

A proposal by Corey Downie was put to the alumni for a Fundraiser based on average monthly donations of $20 by 100 alumni for two years to generate $48,000.

This proposal fuses all the ideas in an effort to meet the financial needs to repair the roof while recognizing the personal needs of individual alumni.

Boundary Limitations: The overall project goal of $48,000 must be achieved to fund the brick walkway.

Check or Money Order
You may mail checks payable to ODPAA and write Heaven & Earth in the memo line so that your contribution is properly accounted.

Please note this address will change after the next election.

You can choose your own one-time or recurring payment in any amount, set up an automatic monthly payment of $20 for two years, or pay the $480 in full.

Please note that donations are NOT tax deductible.

Answers to several questions you may have are in the Frequently Asked Questions section below.

If you still have any questions or concerns not addressed here on this page, please contact Vice President Development / Fundraising: Corey Naab: vpdevelopment@odpalumni.com.

For your viewing, photos of the roof portion of the home inspection can be found here.

Choose Any Amount
One-Time or Recurring 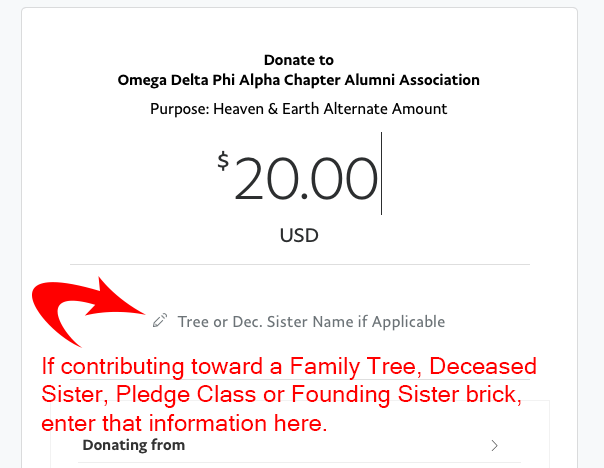 To make your donation with a check or money order, please see the Donation Options tab. Please note that donations are NOT tax deductible.

Please click on the ‘+’ to reveal the answer to each question.  If you have a question that is not answered here, please send an email to Vice President Development / Fundraising Corey Naab at vpdevelopment@odpalumni.com.

$48,000 was set as the target to account for both the roof and sidewalk with some added buffer should there be additional unforeseen costs.

Q: When will we do the roof and sidewalk?

The timing for this fundraiser has been set for two years to raise the necessary funds. The goal is large and it was necessary to have a timeline allowing people to make small incremental payments while bearing in mind that there is a finite amount of life left in the roof.

We will be securing bids on the roof in the near term and will schedule the work when we have good confidence we will have sufficient funds to pay for it. If this is less than two years, we will begin sooner.

We will complete the sidewalk project after we have reached $48,000.

Question: What is the individual fundraising target and how was it determined?

Question: What if I can’t afford $20 per month for two years?

The Fundraising Team would like to give everyone an opportunity to earn a brick while not losing focus that the primary objective is to repair the roof. If we don’t get the roof fixed, the house will be in big trouble. As one sister pointed out, “Where are we if we have a beautiful sidewalk in front of a house that is falling down?”

We understand that bricks are meaningful and therefore we want to offer as many ways to earn one as we can and are open to other creative ideas that might be out there to reach the individual goal. To date, the ways proposed to earn a brick beyond individual payment include:

Question: What are the payment options?

Question: What happened to the brick project as a fundraiser?

The projections for the amount of money we would likely raise through the proposed brick project fell far short of the amount of money needed for the roof. The brick project was projected to raise possibly $8,000 after all costs were deducted. It would take 5 or 6 projects of this nature to raise enough money for the roof, which is a critical need. This would become a full-time job for someone who, like myself, might already have a full-time job and/or might take longer than two years which the roof doesn’t have and/or might create fundraising fatigue for many people. It was determined that the need for the roof was larger and more urgent than the projected funds from the brick fundraiser alone.

However, it was clearly understood that there was continued interest in the bricks. Therefore, the team tried to find a way to fold this into an initiative that targeted raising sufficient funds in a timely manner for the critical roof replacement.

Question: What if I sign up for recurring payments and change my mind?

“What is home? My favorite definition is “a safe place,” a place where one is free from attack, a place where one experiences secure relationships and affirmation. It’s a place where people share and understand each other. Its relationships are nurturing. The people in it do not need to be perfect; instead, they need to be honest, loving, supportive, recognizing a common humanity that makes all of us vulnerable.” ~  Gladys M. Hunt, Honey for a Child’s Heart: The Imaginative Use of Books in Family Life