Derived from the Greek words philos [loving] + anthrōpos [man], philanthropy has become a central part of the Omega Delta Phi Alumni Association’s (ODPAA) activities. We realize the importance of giving back to the community that served as our home during our college years. When we celebrated our 50th Anniversary in July of 2011, ODPAA renewed our commitment to show our love of mankind through various philanthropic efforts. 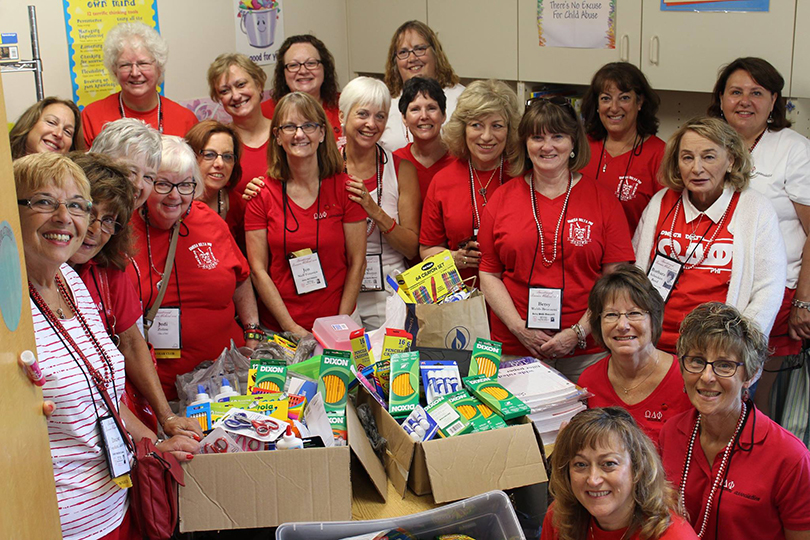 Reunion Weekend All-Greek Alumni Canned Food Drive
Joining in with our fellow alumni, Greek or otherwise, ODPAA encourages our sisters to donate to the All-Greek Alumni Canned Food Drive held during Reunion Weekend.  We also help by placing donation boxes near our RW headquarters at the Townhouses making it easier for everyone to simply drop items off right where we stay.  Donations are given to the campus food pantry as well as a local pantry.

Joining efforts like this not only helps the cause but strengthens the bonds of sisterhood.  The money raised through Relay For Life events helps realize the American Cancer Society’s mission to save lives, celebrate life, and lead the fight for a world without cancer.

For two years, Omega Delta Phi has earned Gold Team Status for raising between 5,000-7499 dollars.  In 2016 we were the highest total of any Greek organization, = 2nd overall. In 2017 we were the top fundraising team, placing us 1st overall.

In the news: Omega Delta Phi and Relay For Life in the news

In the news: Sorority donates 50 hats for newborns at Canton-Potsdam Hospital’s The Birthplace

Bookshelf Presented to Potsdam Library
In 2011, Omega Delta Phi celebrated a milestone, 50th anniversary.  During Alumni Weekend 2011 Omega donated a bookshelf to the children’s corner at the Potsdam Public Library.

“On behalf of the Potsdam Public Library staff, patrons and Board of Trustees – you have our most sincere thanks for your donation of the new toddler book cart. Our children’s section is well used and this cart makes it easy for our patrons and their little ones to find their favorite books and frees up valuable space for sitting and reading. Thank you so much.” ~ Jane Lavigne, Trustee

In the news: Omega Delta Phi Alumni Association bookshelf presentation in the news.